One way to think of the history of the Department of Chemistry is around the history of its buildings. The original building was in use from 1858 until it burned down in 1913. Two years later a state-of-the-art chemistry building opened, which came to be known as Gilman Hall. Gilman Hall housed faculty, labs and administrative offices for the department for nearly a century. Today, Gilman Hall is still heavily used by several units as part of the College of Liberal Arts and Sciences, but most faculty and labs are located in Hach Hall, which opened in 2010. 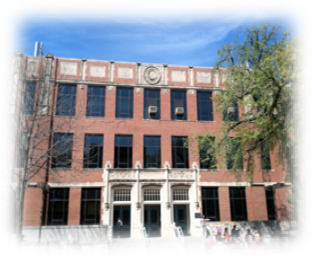 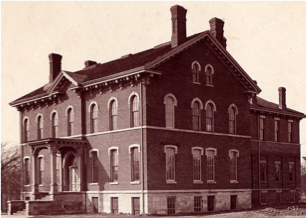 There were three notable chairs, that headed the department in the original building, with two interim leaders. Starting in 1869 Albert Foote was not only 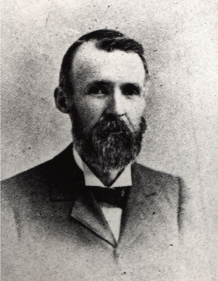 Head of the Department he was the department, alone he got the program started. Foote developed a full four-year curriculum and all students at Iowa State Agriculture College (ISAC), as it was called at the time, were required to take freshman chemistry. He taught all courses and labs, then went home at night to oversee a dormitory of young men. He was fired by the Board of Regents for showing bad temper towards students, but anyone might be grouchy with such a workload. This is not a part of our history that we went to emulate. 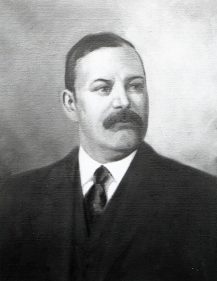 Following Foote as head of the department was Thomas Pope. Pope learned his lesson from Foote's treatment of students. He was noted as a strong teacher with unusual sympathy for struggling students. Pope was hired away by MIT after a few short years.

Looking to continue a culture of strong teaching, Alfred Bennett was appointed as head of the department in 1885. Bennett made many key decisions for the department during his 30-years as chair, building up the department until the original building burned down in 1913. He did make the department's primary mission teaching, mentoring and training students extremely well at the time, a tradition that continues to this day. 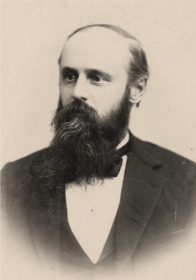 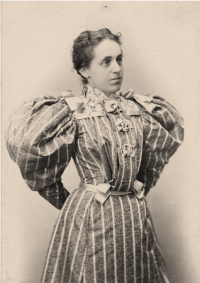 A full four-year curriculum was being taught when Bennett arrived, including labs, but it was all up to him and one assistant. Slowly extra positions were created to help alleviate the enormous teaching loads. One such position was filled by Lola Placeway, pictured here, who was said to be, "a person to be reckoned with." She was hired in 1895 as a teaching assistant, when she had earned her BS in Chemistry from ISAC. Placeway rose through the ranks to be an Associate Professor, she worked with Bennett to build the department, establish a detailed curriculum and equipment. They even co-authored a popular textbook together. Kicking off a tradition of publishing high-profile textbooks and handbooks. She was known for her excellent organizational and teaching skills.

Note the degrees, typical of the day, Placeway became Associate Professor with only a Bachelor's degree, while Bennett became Head with the same degree and earned the MS only later.

In those days they typically hired the best undergraduate students as assistants, some of whom rose through the ranks, like Placeway, but the problem was keeping them. ISAC was famous for training chemists extremely well, and our best students were often in high demand at other schools, especially the upper Midwest and East Coast. This made it hard to retain good BS students to work as teaching assistants here at home.

Many people came and went as staff in the department, one who came was this gentleman, Winfred Forest "Buck" Coover, who will be instrumental later on, but note his degrees as well. He never achieved a degree higher than a Master's. 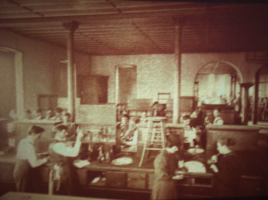 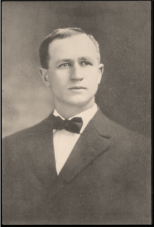 All of this was carried out in the original brick building, erected in 1870 and modified and expanded many times thereafter. It stood southwest of Morrill Hall, roughly where Pearson Hall stands today. Architectural theme seemed to be arches on top windows, on porch and on inner doorways, similar to the Laboratory of Mechanics which is still standing to this day.

In 1913 the original Chemistry Hall burned down from unknown causes. This happened at the start of ISAC's winter break, now it is our spring break, March 25.

It has been said that it burned so fiercely because Placeway and Bennett had varnished the floors so often that a layer of varnish three to four inches thick had built up and that burned well. This photo shows Placeway and Bennett watching the fire burn. Imagine how they must have felt watching their life's work go up in flames - their teaching materials, manual, laboratory equipment, everything. In fact, they were so disheartened that the could not stand the thought of rebuilding. They simply left and later got married. 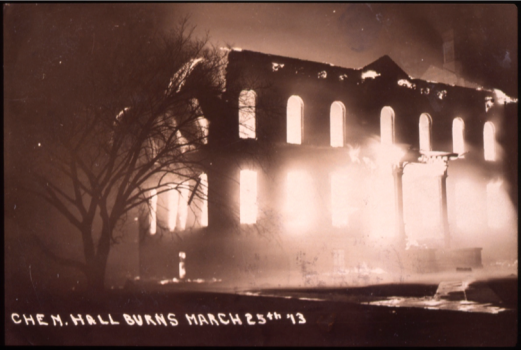 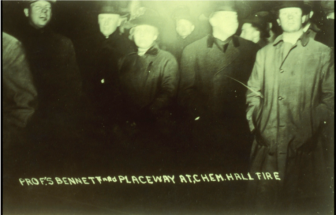 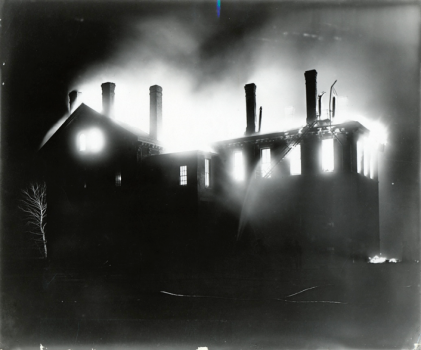 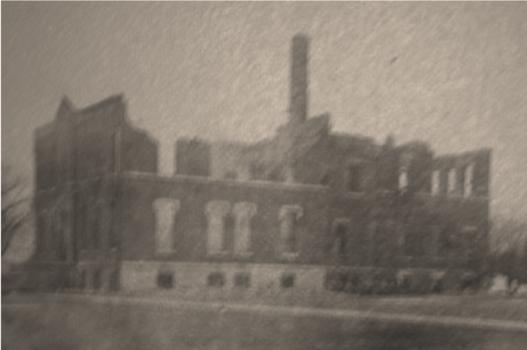 Into this power vacuum stepped Coover. The staff put in remarkable effort so that students would not be set back. Requests for help were telegraphed all over the country, materials were shipped to Ames by train. Attics in other buildings were retrofitted with electricity and gas. Chemistry classes and labs resumed in locations all over campus when the students returned from break. No time was lost.

Coover quickly toured other universities by train to find out what the cutting-edge technologies were, he wanted his building to be cutting-edge.

As a result, the building included asphalt floors because they were believed to alleviate the discomfort of standing for long hours, at lab benches. It also included a ventilation system consisting of two enormous fans in the basement that drew air from the bottom of the building and vented it through the roof, the building was like one huge fume hood. For obvious reasons, he also wanted it to be fireproof, and as big or bigger than any chemistry building in the US or Europe. 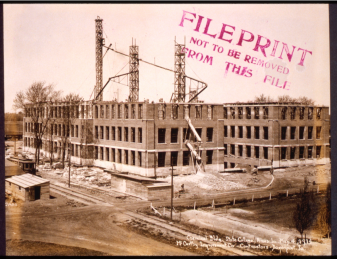 Coover and President Raymond A. Pearson, ISU's seventh president, who served from 1912 to 1926, managed to convince the state of Iowa to give them $250,000.00, which was only enough to build the shell of the building of his dreams. But build it they did, unbelievably, incredibly fast. So fast that 17 months later, it was open for classes. But there was a catch, it was just the shell that opened for classes. Everyone had to improvise the class, lab and office spaces.

“Not an office, laboratory, or classroom was completed when the building opened in September of 1914. The new Chemistry building turned out to be one of the busiest places on the campus and the language of the place was reminiscent of the Tower of Babel.”
– H. Svec 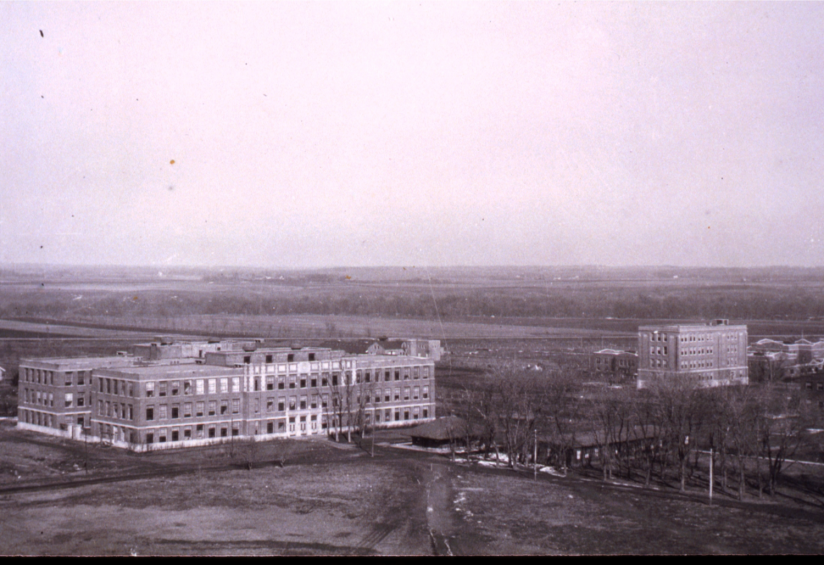 The shape of the new chemistry building may have been to promote fireproofing, making it easier to isolate parts of the building. Indeed, according to Svec's history, there were several fires in the building in the years after it was built, but they were always controlled and localized easily.

With the new Chemistry Building in hand, Coover turned to building the faculty. His strategy included hiring individuals who held a PhD. He put a strong emphasis on research and fostered specialization within the field. Some of the first specializations included: catalysis, nutritional, soil, textile, dairy, metallurgy, and analytical chemistry. Research achievements within Gilman Hall in this era led to:

Two of Coover's landmark hires, have become landmarks in their own right having buildings on campus in their namesake. 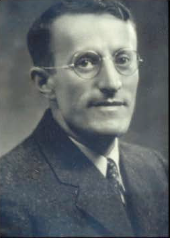 Henry Gilman earned his PhD at Harvard under E.P. Kohler, started at Iowa State College in 1919, just five years after the building that now bears his name opened. No doubt he was attracted here by the gleaming, new, state-of-art facility. He was very famous for his organometallic chemistry, especially organolithium chemistry. His organolithium reagents are still in heavy use today in synthetic chemistry as they are easier to store and use than Grignard reagents. During his tenure he authored 1020 papers, over half of them after going blind in 1947.