The biological world has unparalleled abilities to control structures, functions, reactions, and energy transfer with great efficiency and accuracy.  We are interested in biomimetic chemistry to “abstract good design from nature.”  One of our main research goals is to design molecules that functionally mimic certain biological systems, and in turn to prepare molecules, polymers, and materials that have useful and superior properties.

Molecular recognition is at the heart of biology and many biotechnological applications. If cheap and robust synthetic receptors can be prepared for arbitrarily selected drugs, carbohydrate, or oligopeptides, numerous new technologies and biomedical tools will become possible. Improved drug analysis, extraction of drugs or biomolecules from their natural milieu, novel sensors, intervention of biomolecular recognition, and replacing expensive antibodies in affinity chromatography are but some of the possibilities enabled by such antibody-mimicking materials.

Specific functional groups can be installed in the binding sites of MINPs to convert them into enzyme-like catalysts. Our synthetic zinc-based esterases were able to selectively hydrolyze esters that differed in the position of a single methyl group by 1 carbon. The catalytic turnover numbers were an order of magnitude higher than those reported in the literature (ACS Catal. 2018, http://dx.doi.org/10.1021/acscatal.8b02292; 2019, http://dx.doi.org/10.1021/acscatal.9b00630).

A poor or mediocre stereoselectivity is a key roadblock for a chiral catalyst to find practical adoptions. MINP can be made to contain a chiral space near a catalyst to provide gated entrance of reactants to the catalytic center. Such “chiral gating” enabled the ee of adol reaction to increase from 3% to up to 99% in water, in a size- and shape-selective manner. With the help of MINP, even racemic catalysts afforded >70% ee. (JACS cover story 2019, https://doi.org/10.1021/jacs.9b06619, highlighted in ChemistryViews).

The performance of a catalyst is determined by both the active site and its environment.  The principle is demonstrated exquisitely by enzymes, which use the protein framework to control the polarity, acidity/basicity, size, shape, chirality of the active site, and, ultimately, the activity/selectivity of the catalyst.

The gold clusters within the ICRMs displayed excellent activity. Intermolecular hydroamination of alkynes is catalyzed by homogeneous Au(I) or Au(III) complexes, usually in the presence of acid promoters and special ligands and colloidal gold was reported to display no catalytic activity. In our hands, the reaction happened readily at room temperature with ICRM-trapped gold clusters (i.e., Aun@ICRM). Not only so, the hydrophilic core of the ICRM allowed us to perform localized sol-gel chemistry to introduce different metal oxides near the gold clusters. Separately, we found functional groups on the ICRM shell could be used to “pull” substrates toward the encapsulated Au cluster. As the binding functionality (i.e., carboxyl) in the substrate was converted, the product was rapidly ejected into the environment, making Aun@ICRM behave like a “catalytic nanomachine” (JACS 2014, http://dx.doi.org/10.1021/ja501277j).

Surfactant micelles are dynamic entities with rapid exchange of monomers.  By “clicking” tripropargylammonium-containing surfactants with diazide cross-linkers, we obtained surface-cross-linked micelles (SCMs) that could be multifunctionalized for different applications (JACS 2010, http://dx.doi.org/10.1021/ja103391k; Langmuir Feature Article 2016, http://pubs.acs.org/doi/abs/10.1021/acs.langmuir.6b01162). They triggered membrane fusion through tunable electrostatic interactions with lipid bilayers. Antenna chromophores could be installed on them to create artificial light-harvesting complexes with efficient energy migration among tens to hundreds of chromophores. When cleavable cross-linkers were used, the SCMs could break apart in response to redox or pH signals, ejecting entrapped contents quickly as a result of built-in electrostatic stress. They served as caged surfactants whose surface activity was turned on by environmental stimuli. They crossed cell membranes readily. Encapsulated fluorophores showed enhanced photophysical properties including improved quantum yields and greatly expanded Stokes shifts. Catalytic groups could be installed on the surface or in the interior, covalently attached or physically entrapped. As enzyme-mimics, the SCMs enabled rational engineering of the microenvironment around the catalysts to afford activity and selectivity not possible with conventional catalysts.

A unique feature of biomolecules lies in their conformational control.  The binding and catalytic functions of many protein receptors and enzymes are regulated through their reversible conformational changes.  In fact, biological systems rely on these conformationally responsive molecules to sense and react to constantly fluctuating environmental conditions.  As chemists, however, we have difficulty controlling even the conformation of small to medium-sized molecules.  Such a knowledge gap not only hinders our abilities to intervene with the conformationally complex biological systems, but also prevents us from rationally designing environmentally responsive, biomolecule-like, “smart” materials through the bottom-up approach based on abiotic backbones.

We have prepared synthetic molecules (i.e., foldamers) that could fold into helical structures with nanometer-sized internal hydrophilic cavities (Acc. Chem. Res. 2013, http://dx.doi.org/10.1021/ar300337f).  Cavities of this size are typically observed only in the tertiary and quaternary structures of proteins but were formed in our foldamer prepared in just a few steps from the monomer.  Similar to many proteins, our foldamers displayed cooperativity in the folding/unfolding equilibrium and followed a two-state conformational transition (JACS 2005, http://dx.doi.org/10.1021/ja056151p; JACS 2007, http://dx.doi.org/10.1021/ja0671159).  In addition, their conformational change could be triggered by solvent polarity, pH, or presence of metal ions and certain organic molecules.  We have prepared hybrid foldamers by inserting natural amino acids into the foldamer sequence and obtained fluorescent sensors capable of detecting metal ions such as mercury.  A remarkable feature of the foldamer-sensor was a great tunability in sensitivity (>5 orders of magnitude) as a result of the cooperative conformational transition (JACS 2006, http://dx.doi.org/10.1021/ja062001i).

Channels and pores are used in biology to permeate ions and molecules across membranes. In addition to their important roles in signaling, metabolism, and bacterial or viral infection, channels and pores enable design of novel sensors for both small and large molecules. By applying the solvophobic folding of the linear oligocholates to amphiphilic macrocycles (JACS 2010, http://dx.doi.org/10.1021/ja103694p), we have created synthetic nanopores driven by hydrophobic interactions—a very different mechanism of pore formation from common biological and synthetic examples. Normally, if the environment (i.e., lipid bilayers) is hydrophobic, hydrophobic interactions are not expected to contribute significantly to a supramolecular synthesis. The self-assembled pores displayed highly unusual behavior as a result of the counterintuitive pore-formation. Cholesterol is known to increase the hydrophobic thickness of lipid bilayers and decrease their fluidity. Yet, the enhanced hydrophobicity caused by cholesterol facilitated the pore formation of the oligocholate macrocycles and increased the permeability of glucose across the membranes. Larger hydrophilic molecules normally have difficulty moving across a hydrophobic barrier. The cyclic cholate tetramer, however, was more effective at permeating maltotriose than glucose (JACS 2011, http://dx.doi.org/10.1021/ja109036z). 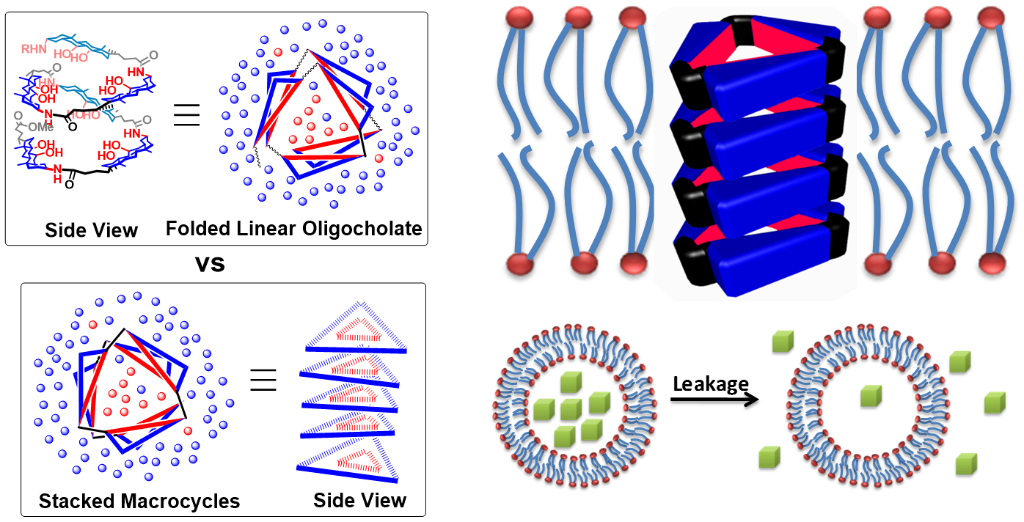