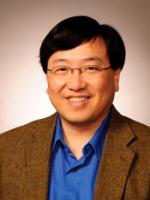 Victor S.-Y. Lin, Professor of Chemistry, received his Ph.D. from the University of Pennsylvania in the end of 1996. After working as a Skaggs postdoctoral fellow at the Scripps Research Institute, he joined the faculty at Iowa State in the fall of 1999. Dr. Lin is the director of the Center of Catalysis at Iowa State University. He also serves as the Program Director of the Chemical and Biological Sciences Program in the U.S. Department of Energy Ames Laboratory. His research centers on the design of functional nanoporous materials for biotechnological and biomedical applications, such as biosensor design, drug delivery, and gene transfection. His group also specializes in the synthesis of mesoporous heterogeneous catalysts for various reactions, such as cooperative catalysis, carbonyl activation, biodiesel production, and other biorenewable energy applications. Professor Lin has received a number of awards for his work, including a National Science Foundation CAREER award in 2002, a LAS award for Early Achievement in Research/Artistic Creativity in 2004 at Iowa State University, an Outstanding Technology Development award of the U.S. Federal Laboratory Consortium in 2005, and the ISU Award for Mid-Career Achievement in Research in 2008. He serves on the Editorial Advisory Board of the Advanced Functional Materials, WILEY-VCH.

Sadly, Victor died May 4, 2010 after a brief illness. He had been an Iowa State professor of chemistry since 1999 and an Ames Laboratory scientist since 2001.

"In 43 brief years, Victor achieved more than the vast majority of us will never dare to dream of in twice that time. Yet, for all his achievement and all his honors, one of his most outstanding characteristics was his love and loyalty for Iowa State University, the Department of Chemistry, and the Ames Laboratory.

All of us grieve Victor's loss. But we are thankful for having him as a friend and a colleague and as a model of excellence and of loyalty."