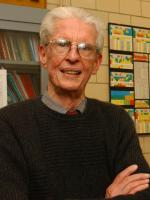 It is appropriate that a man who truly loved his life's work - and who at age 87 went to his office daily - would pass away on the day that celebrated and honored workers, Labor Day, Sep 2, 2013. John Dudley Corbett, a resident of Ames for over sixty years, died six days after a severe stroke.

John was a Distinguished Professor at Iowa State University who joined the faculty in 1952 in inorganic chemistry. In his long career, he was mentor and co-researcher to scores of graduate and post-doctoral students, many of whom he still keeps in close contact with and who praise his mentorship, friendship, energy, and enthusiasm for chemistry. John received virtually every major award in his field, notably the Humboldt Prize (1985), membership in the National Academy of Sciences (1992) and the Distinguished Service Award from the American Chemical Society (2000). In 2007 he established an endowed professorship at ISU in his name.

John was born March 23, 1926 in Yakima, Washington to Alexander and Elizabeth Corbett. In high school, he practiced falconry, was a skilled ice-skater, and met F. Irene Lienkaemper, with whom he flirted in Latin class, took to Puget Sound on family vacations, and married in 1948. After living in Seattle and finishing his doctorate at the University of Washington, John and Irene moved to Ames where they raised three children south of town. John treasured his time tending the garden and puttering in the yard and woods; the physical effort and dirt under his fingernails was the perfect complement to all the brain-time spent on chemistry. A board member of Ames Town and Gown, John loved classical music and lingered after church to hear the organ recessional. He adored great food and enthusiastically explored ethnic cuisine on his world travel to chemistry conferences. His current passport has only a few unstamped pages.