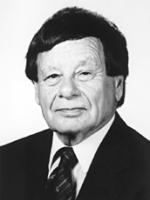 James S. Fritz, distinguished professor of Liberal Arts and Sciences, received a B.S. from Millikin University in 1945 and a Ph.D. in analytical chemistry from the University of Illinois in 1948. After three years as assistant professor at Wayne State, he came to Iowa State University in 1951. Dr. Fritz is known for his research in analytical chemistry and chromatography. He is the author or coauthor of more than 300 published papers and of several books, including the textbook, Quantitative Analytical Chemistry (5 editions) and Ion Chromatography (3 editions), and Analytical Solid Phase Extraction, (1999). Dr. Fritz has received awards, including the Dal Nogare Award, Delaware Valley Chromatography Forum (1991), the First International Chromatography Forum Award (1988), the L. S. Palmer Award, Minnesota Chromatography Forum (1987), the A.C.S. Award in Chromatography (1976) and the A.C.S. Award in Analytical Chemistry (1985). He has given numerous scientific lectures in the United States, Europe, Australia, and South Africa.

James "Jim" Fritz, 88, of Ames, died at his home under hospice care on Monday, Dec. 10, 2012. Funeral services will be at 10 a.m. on Friday, Dec. 14, at Adams Funeral Home. The family will receive friends starting at 9 a.m. until the time of the service. Burial will be in Iowa State University Cemetery.

After having obtained a doctorate degree in 1948 by the University of Illinois, Professor James S. Fritz became senior chemist and professor of chemistry at Iowa State University in 1960. He was named distinguished professor in liberal arts and sciences in 1990. Besides ion chromatography, his research interests were titrations, solid-phase extractions, capillary electrophoresis and analytical complexing reagents. He authored or co-authored several scientific books, including Fritz and Gjerde’s "Ion Chromatography." In addition, he published more than 325 scientific publications.

Following the death of his first wife, Joan, in 1987, Jim and Mim were married July 15, 1989. His greatest joys were tennis, gardening, appreciation of music and especially his family.

He is survived by his wife, Mim, of Ames; four daughters, Lisa, of San Diego, Julie, of Chicago, Laurel, of Ames, and Margy, of Lincoln, Neb.; 10 grandchildren; and Nim’s family.

He was preceded in death by his parents, Lawrence and Mae Fritz; and his first wife, Joan.

Memorial contributions may be made to the Iowa State University Foundation or Homeward Hospice.