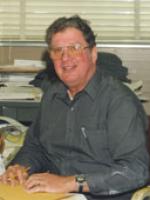 His Ph.D. research was in the area of thermodynamic studies using the techniques of high-temperature chemistry. HIs postdoctoral research was in x-ray crystallography.  The research at ISU has been in the area of the synthesis of novel high-temperature materials and the determination of their structures using x-ray diffraction.  This research centered on metal-rich refractory materials and included studies of phase transitions and vaporization reactions.