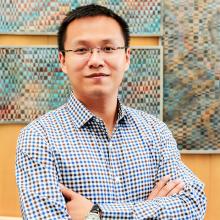 Catalysis at surfaces and interfaces where there exists bi- or multi-component cooperation has been identified as crucial for many processes related to energy and environmental applications. In this talk, I will highlight such cooperative catalysis can be synthetically controlled at nanometer and singe-atom scale over well-defined nanocrystals, and can play critical roles in maximizing the benefit of oxygen-mediated energy conversion reactions: oxygen reduction reaction (ORR) for fuel cells and oxygen evolution reaction (OER) for water electrolyzer. The first example is M-Pt (M=non-precious metals) core-shell nanocrystals within which desirable/undesirable interfaces between non-precious metal M core and precious metal Pt shell are identified by density functional theory (DFT) calculations and are practically balanced by nanocrystal synthesis. The optimized core-shell nanocrystals exhibit favorable interfacial interaction at nanometer scale through properly coupled electronic and strain effects, leading to an enhanced electrocatalytic efficiency toward oxygen reduction reaction (ORR). In second example, we take advantage of single-atom Co's synergy with various oxide support for electrochemical oxygen evolution reaction (OER). By choosing the proper oxide supporting nanocrystals, single atom Co conversion and stabilization at high valence OER active site can be controlled through its interaction with supporting materials. The relevant theoretical calculation, controlled synthesis and structural/catalytic characterization of nanocrystals will be discussed.

Dr. Sen Zhang grew up in Hefei, Anhui, China. He received his B.Sc. in Polymer Chemistry at the University of Science and Technology of China in 2008. From there he went on to receive his Ph.D. in inorganic chemistry in 2013 at Brown University under advisor Dr. Shouheng Sun. Professionally, he worked as a NatureNet postdoctoral fellow under Dr. Christopher Murray at the University of Pennsylvania from 2013 to 2016. He joined the University of Virginia as an assistant professor of chemistry in August 2016. His research interests are in nanomaterials controlled synthesis, assembly, and heterogeneous catalysis for reactions involved in energy and environmental applications, such as fuel cells reactions, water splitting, and CO2-to-fuel conversion.